There are many times when anime titles leave you scratching your head, wondering what the creator of this show was thinking. Such is the case with anime series that have original titles that either sound really silly or even make no sense at all.

To find these moments, we have compiled a list of some of the most ridiculous anime titles in history. And oh my god was there are a lot of them! Whether it’s because they were just too long or sounded like something out of the left-field, you’ll certainly find yourself laughing at these title choices until you fall off your chair.

From the ‘The Legend of The Legendary Heros’ to ‘The Asterisk War: The Academy City on the Water’, let’s take a look at this list of ridiculous anime titles and see if there are any you can relate to:

Most Ridiculous Anime Titles in History This super long title was used for the manga of the same name. Throughout the series, we follow the adventures of Ryner Lute. He attends the Roland Empire Royal Magicians’ Academy. Eventually, he sets off on a quest to find the relics of a “Legendary Hero”. Assisted by local swordswoman Ferris Eris, he journeys to the Valley. And as the two set out, they soon discover that a deadly curse is spreading across the continent.

2) The Asterisk War: The Academy City on the Water (Gakusen Toshi Asterisk) The anime follows a group of students who attend the elite Seidoukan Academy and are pulled into various factions and struggles as their school is trying to go unchecked by an evil corporation known as “Academy City”. So, to defeat this corporate society, they must seek out a mysterious siren, known as “the one called Asterisk” who will save them from their fate by defeating all seven of their star kings. 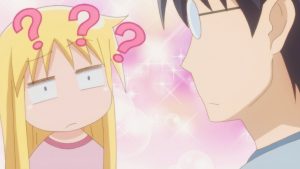 “I Can’t Understand What My Husband is Saying” was created by the popular anime studio Brain’s Base. They are directly responsible for many other titles that can be seen on this list. Because of this, it shouldn’t come as too much of a shock. That even an anime about married people is crazy enough to go down on our list. I mean the title really says it all. The story follows a common teenage boy. He is kidnapped by a “young lad’s school”. As the title suggests they kidnap him as a sample of the common people. Therefore, these wealthy young girls want to learn what is common or normal is all about. Another anime on the list perfectly explains the plot of the anime in its title. Kanade Amakusa is forced to choose between terrible options in life because of the “Absolute One” system. His system is enforced by a petty god who makes Amakusa often embarrassed in public.

6) We Still Don’t Know the Name of The Flower We Saw That Day (Anohana or Ano Hi Mita Hana no Namae wo Bokutachi wa Mada Shiranai.) The anime “Anohana” as it is popularly known as has an alternative title. And it is as you can see ridiculously long. But unlike other titles on this list, it at least does not give away the main plot. And unlike other animes on this list, Anohana is a much more tragic and heartwarming anime. Yes, you heard it right. She punishes people with her butt attack. Butt Attack Punisher Girl Gautaman follows the story of Mari Amachi. She is a devout Christian and transfers to a new school. Here she has to save her friend who has been kidnapped by a Black Buddha Cult.  So as a friend, Mari wants to only help her, and that’s why she becomes Butt Attack Punisher Girl Gotaman.