Are you a knowledge enthusiast? How often do you take IQ tests to challenge yourself? You might come across a strong competitor in a few years to come. Two-year-old Kashe Quest might set new bars for the generation. Recently Kashe has become the youngest American member of Mensa UK which requires you to have a high IQ test score to be a part of.

The two-year-old can name all the elements on the periodic table, name 50 states and identify their shape and location. Moreover, she has been learning Spanish and deciphering patterns at the same time.

Kashe Quest ranks among the top 2% in the Mensa IQ test. An Interview with Kashe’s parents, explains how she scored such high IQ test as a two-year-old.

Kashe’s father mentions how she has always been exploring her surroundings. Things she couldn’t understand, she would learn the subject’s functioning and apply it too.

Kashe’s family mentions her vocabulary development as soon as she started learning a few words. Her skills developed rapidly. She was able to speak in sentences that contained more than five words. Kashe amazed her family with everything she did. Eventually, Kashe’s family felt she might be advanced for her age.

Not your ordinary toddler 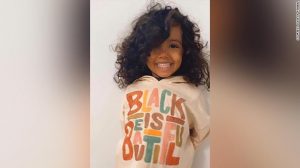 Kashe’s pediatrician was equally amazed at her ability to learn number shapes and colors when she had her 18 monthly follow-ups. Her mother often kept her pediatrician updated on her progress which was rapidly progressing.

Kashe’s parents later decided to visit the psychologist with her. The psychologist administered the Mensa test. Kashe successfully scored an IQ of 146 according to her parents.

The applicants must score 98th or above percent in the IQ test to join Mensa.

Her parents provide her with everything she needs for her development and natural curiosity and disposition. Kashe’s parents have constantly made efforts in playing their role as good parents.

Kashe’s family makes sure they motivate her enough and remind her of how proud her parents are of her. When Kashe gets frustrated doing a task her parents comfort her which Kashe has learned and applies back to her parents.

Kashi would praise her father every time he is trying to open a jar of pickles. She would tell him how proud she is of him.

A kid can actually become unstoppable if you support them rightfully. Kashe’s parents have taken it to the next level with the creation of a preschool. With a background in education, Sukhjit created a preschool which has also fulfilled the community need during the pandemic. The circumstance created a new modern preschool.

Kashe enrolled with the children in the preschool. Her parents believe that she is a two-year-old despite her talent. Along with Kashi, the preschool has 12 children enrolled with opened on 12th October. They are further planning to expand the larger building to accommodate more children from the waiting list.

Kashe’s parents do not carry out a different communication with her instead they choose the right words which are intentional. They observe how she would repeat their words which makes them careful of what they speak to her and each other.

As a result, Kashe’s parents feel that it has supported Kashe’s vocabulary and made them better at communicating. Despite the constant encouragement she receives from her parents, she is free to choose and learn what she prefers.

They make sure Kashe receives skills and a growth mindset to grow into a strong individual.

This Year, Binge-Watch These Four Korean-Thriller Movies
Tiananmen Square Massacre Does Not Exist in Chinese History