If you have an interest in art, then you must read the biography of the English illustrator, graphic humorist, and political humorist, Sir John Tenniel. He is recognized worldwide for serving over five decades as the principal political cartoonist for Punch magazine. In the year 1842, he came up with his first book illustration for Samuel Carter Hall’s The Book of British Ballads. During the initial phase of his career as an illustrator, the government of London was coming with various contests to grow Germanic Nazarenes style in order to support the English school of art.

Matter of fact, Tenniel was also influenced by the German Nazarenes style of illustration, which was adopted by German Romantic painters who had the aim to revive honesty and spirituality in Christian art. John is still remembered for his illustrations for Punch, a British weekly magazine, and Lewis Carroll’s Alice’s Adventures in Wonderland (1865) as well as Through the Looking Glass, and What Alice Found There (1871).

If you want to find in detail about Sir John Tenniel’s biography with his arts, illustrations, drawings, and facts, stay on this article until the end. Keep reading.

John Tenniel was born on 28th February 1820 in Bayswater, England and was the holder of British nationality. His father, John Baptist Tenniel was a dancing master and belonged from Huguenot descent. Similarly, his mother was Eliza Maria Tenniel. He was raised along with his five siblings; two brothers and three sisters.

Since childhood, John had a great interest in art and drawings. His behavior was smooth to all, even though he was an introvert person in his early years. He never followed the limelight and always lived on the edge of respectability. Besides, he shared a very strong bond with his family and always lived carefully so that his parents never get upset due to him.

At the age of 20, John Tenniel lost his right eyesight while practicing fencing with his dad in 1840. He accidentally received a serious eye wound that harmed his right eye’s protective tip. The incident happened from his father’s foil.

Matter of fact, he never confronted his father about his eye injury. After some years, he gradually lost his right eyesight. Even though he couldn’t see from his one eye, he never gave up in his career of illustration.

Also, read: Else Lasker-Schüler: Everything About Most Influential German Poet And Artist

In order to pursue his career as an illustrator, John Tenniel attended the Royal Academy of Arts in 1942. He struggled a lot to nurture his artistic ambitions, however, never satisfied with the school’s teaching methods. He then started painting by himself. Due to the lack of instruction in drawing, he started copying illustrations from books and costumes in the British Museum.

Not only this but John went to London theatres to observe the actors and zoo to observe animals. Following, he joined the Artist’s Society or Clipstone Street Life Academy which helped him push his career in art.

Due to his incredible memory power and art skills, John Tenniel worked on his first book illustration for Samuel Carter Hall’s The Book of British Ballads in 1842. Following, he went to the 1845 House of Lords competition as a contestant. There he received £200 for his 16-foot cartoon, An Allegory of Justice.

After gathering more knowledge in art, John Tenniel started making illustrations for the British weekly magazine, Punch. He submitted his first drawing titled Lord Jack the Gaint Killer where he showed Lord John Russell attacking Cardinal Wiseman. He then offered the position of the British caricaturist and illustrator, John Leech.

John’s political arts mainly reflected the hostility of Irish Nationalism. He then published a drawing titled An Unequal Match in Punch in 1881. He used to earn £800 a year and contributed around 2,300 cartoons along with minor drawings to the Punch magazine.

Although John Tenniel contributed a lot of political cartoons and drawing to Punch, his real fame came through his illustrations for Alice. Matter of fact, he worked on 92 drawing for Lewis Carroll’s Alice’s Adventures in Wonderland 1865. In 1871, he came up with a famous illustration for Alice titled Through the Looking-Glass and What Alice Found There.

His drawing technique won the heart of millions where the first print of the illustration was sold of 2,000 copies in the United States. It helped him to increase his fame in more and more people.

John Tenniel was knighted for public service by Queen Victoria in 1893. Matter of fact, he was the first illustrator to get such honor. He retired from his illustrating profession in January 1901. After 13 years from his retirement, he left the world on 25th February 1914, three days prior to his 94th birthday. His burial held in Kensal Green Cemetery in London.

Also, read: How Greensboro Sit-In Civil Rights Movement Changed The History of Black People? Why & When Did It Start?

Google Doodle Honored Him On His 200th Birth Anniversary

On February 28, Google celebrated the 200th birth anniversary of the British illustrator, Sir John Tenniel with a doodle.

Although he is way far from us now, his illustrations have left his footprints behind in the world. He will remain in our memories forever. 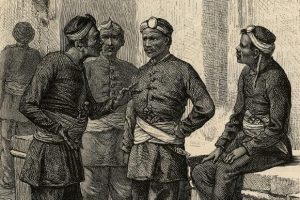