We are fond of puffball fury cats. Aren’t we? But, did you know that ages ago cats were not only considered a pet but divine energy in Egypt? The first-ever culture of domesticating cats came from Egypt. DNA evidence suggests that wild cats first “self-domesticated” in the Near East and Egypt roughly 10,000 years ago when spotted felines wandered into early agricultural societies to feed on grain-stealing rodents and stuck around for the free scraps and backrubs from grateful humans.

However, Egyptians didn’t see cats as just a pet but gave them a lot more respect and affection. Eventually, the animal became the symbol of divinity and protection. This blog reveals how a common animal got so much affection and respect in Egyptian society thousand years ago.

According to Julia Troche, an Egyptologist, assistant professor of history at Missouri State University. “Cats might come inside when it was hot, and they, in turn, would chase away dangerous animals. Such as snakes, many of which were venomous and scorpions.” In the wake of that ancient Egyptians always saw cats as mutually beneficial companions.

We can also fathom the roles of cats in ancient Egyptian society from scenes of everyday life represented in paintings. Troche says, “In tombs scenes, cats are shown laying or sitting below chairs, chasing birds and playing.” In addition to that, “In some mortuary texts, they are shown with a dagger, cutting through Apophis: the snake deity who threatens Ra (the sun) at night in the Underworld.”

Well, if you are fond of Egyptian history. You might as well know what mummification is. Mummification is the process of preserving the body after death by deliberately drying or embalming flesh. This typically involved removing moisture from a deceased body and using chemicals or natural preservatives, such as resin, to desiccate the flesh and organs.

A new #discovery in #Saqqara #today reveals tens of #cats #mummies and #statues of the #cat #goddess #Bastet pic.twitter.com/DYswenyBXM

Cat’s companionship excelled even in the afterlife. This is what the Egyptians believed. After keeping a cat as a pet and protector.  Ancient Egyptians further continued that relationship into the afterlife. “The tomb was one’s posthumous house for eternity,” Troche explains. “In your tombs, you would depict your family, your greatest titles and awards, and the things you enjoyed doing. So, to see cats included in these tableaus speaks to their importance both in the daily lives of ancient Egyptians and in their hope that they continued with them into the Hereafter.” Moreover, cats used to be mummified. There is a reason for that. Monique Skidmore, a professor of anthropology at Deakin University and editor of Trip Anthropologist. “This meant that the deceased person could inhabit the body of the mummified cat in the afterlife.” Egyptians thought of cats in such high regard that they wanted to be reborn as cats.

Who made it trendy?

Ancient Royals made cats trendy. Across various civilizations and cultures. Ancient Egyptians always saw royals as trendsetters. From food to fashion, to felines, they were the trendsetters. Skidmore says, “Ancient Egyptians held cats in such high regard because of the practices and preferences of their gods, but also because their kings, the pharaohs, kept giant cats.” Furthermore, she adds, “Members of the Egyptian royal class dressed their cats in gold and let them eat from their plates.” However, members of the lower classes weren’t in a position to dress their cats in precious jewelry or accessories. Despite they used to make them wear their own jewelry featuring feline designs.

Another interesting fact is that cats were given full protection. When the cat culture was rising up, the penalty for killing a cat even by accident was death. However, mummification was still okay to accompany their owners into the afterlife. Maybe after reading this blog, your affection and respect for cats have ascended even more. No matter what, all animals surely have their oven divine energy and we should love them regardless of that.

Also Read: Everything About Mayan People and their Civilization Facts We have seen lots of stunning aerial photos. Now, photographers use drones and other innovations to take these shots, but that got me thinking, how... 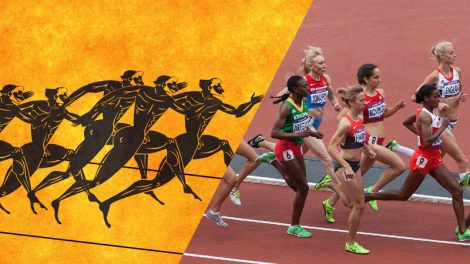