The Interplanetary File System (IPFS) is an Internet protocol based on the content-addressing technique. It was developed by Juan Benet in 2014 primarily for data storage, and access of addresses of the information stored in the network. IPFS being an open-source platform is dedicated to improving performance compared to its predecessor, HTTP (Hypertext Transfer Protocol).  The IPFS appears to be a magic wand that can possibly facilitate offline networking, bufferless streaming, and DoS attack-free Internet.

How IPFS is different from HTTP?

Let’s get into the basic working mechanisms to know how IPFS gained the upper hand over HTTP. Basically, whenever you enter a URL in the web browser, the browser firstly sends the request to the centralized server. The server that hosts that website uses the IP address to allow access to the website as a response to the request. This process is referred to as location-based addressing as it uses IP addresses for location.

HTTP does simplify management and distribution. However, it does not work efficiently in all cases. One such instance is the costlier process of downloading files from servers located at a greater distance which requires high utilization of bandwidth.

Likewise, a large number of requests for the same site, generally popular websites, causes lag or slower loading. Web-users and hosts have put up with this for a long time. Even the hackers have used this to their advantage where they halt the functioning of a website denying services to the users. It is a form of hacking called a Denial of Service (D0S) attack.

On the contrary, the IPFS can replace HTTP and can tackle all these challenges. What makes IPFS so powerful is the peer-to-peer network which relies on a distributed file system. The IPFS looks like a promising system in terms of better security, censorship, and speed. Similarly, the DoS attacks have no chance as there is no centralized system to attack in IPFS. 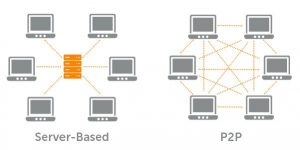 How the file-sharing takes place in IPFS?

IPFS offers a distributed file system in which the requests from a node then passes to the nearest node but not to a single centralized server.

This is made possible by linking all the devices available on the network to the same file structure called Merkle DAG. The cryptographic hash of the content uniquely identifies its file and blocks. The hash not only ensures you get the right file but also reduces the risk of unsafe downloads as cryptographic hashes are tamper-proof.

Besides the content owner, other nodes too can easily host the content on the network via the hash key. Basically, one connects to the network and requests a file. The request then reaches the peer who has that file. And once you have downloaded the file, you can now host that content and pass it onto the other nodes. Overall, one can act as both client and server in the IPFS network.

The IPFS cuts down all the time and travel expenses that exist in the client-server model where information travel to and from the server to the nodes. The ability to initialize any nodes as a host greatly reduces bandwidth costs and latency issues. Moreover, hosting functionality will take the edge of the server dependency.

How to get started?

Anyone wishing to use the IPFS network needs to install the software first and run an IPFS node. The system is still in the alpha testing phase. So, take a look at the security guides and instructions before proceeding.