It’s easy to say a lot about a person if you get to spend a lot of time together.

You’ll be familiar with their behavior, their way of living, and everything else. But it’s really hard to know about a stranger’s traits.

And when you don’t understand someone even the slightest bit, it becomes hard to communicate.

Sometimes we wish we could possess a superpower which would help us to understand people better.

But sadly, our real life isn’t some movie where things like this happen.

In fact, it becomes harder to understand even the people we know if we don’t try hard enough, let alone strangers.

However, there is a little ray of hope of knowing people better. And one of the best ways is to analyze the way they write.

That’s right people, you can say a lot (and when I say a lot that really means a lot) about people by just looking at their handwriting.

Graphology is a science that analyzes a person’s traits from their handwriting. From their characters to their behaviors, abilities, and personalities.

Apart from that graphology is also used for criminal investigation and compatibility.

It’s even used in the medical field to better understand your health. It is used as an aid in diagnosis and tracking diseases.

As surprising as it sounds, graphologists can find out more than 5000 different personality traits by just analyzing your handwriting.

Here are a few ways graphologists can figure out your different traits by analyzing your handwriting.

The size of the letters. People write in different ways. Some have huge handwritings, while some have really small or average.

People that have a habit of writing large letters are usually considered extroverts. They have a big personality and are usually the center of attention. Your are people oriented and feel the need to be understood and noticed.

People who write a really small letter, however, are the exact opposite. They’re shy and introverted. They have great concentration and focusing abilities.

The people who have average-sized handwriting are easily adaptable. They’re very well-balanced but can be both introvert and extrovert. Another writing style people have is the spacing between the letters. Some tend to write in spacious ways while some have very little spaces.

If the spaces between the words are wide, you tend to love freedom and want to be left alone. You easily get overwhelmed but also have poor time management skills.

If you have smaller gaps you feel the need to be surrounded by other people and love to be among the crowd. But you also are aware of your boundaries. Graphologists can also reveal a lot about your personality by the pressure you put into writing.

If you have heavy pressure while writing it means you’re very quick to react to things. You might have strong emotions and intensity. You take things seriously and are good with commitments.

If you write using light pressure you tend to be sensitive but don’t wear yourself out emotionally. You have great empathy to people by also have a lack of vitality. 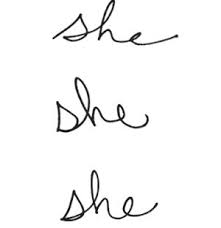 Some people tend to have slants while writing. Some slant towards the right while some towards left. But some also write very straight.

If you have a right slant you enjoy meeting new people and are open to new experiences and opportunities. You value your friends and family very highly. You’re friendly, sentimental, impulsive, and heart-centered.

If your writings are slated left you are reserved and introspective. You value yourself more and prefer to work with things rather than people.

And if you don’t have any slants while you write you’re logical and practical. You’re strong enough to not let your emotions get the best of you.

People can also tell a lot about you from the speed of your writing.

If you have a quick speed you tend to hate delays or people that simply waste time. Also, you’re very impatient.

But if you write very slow you’re more organized and self-reliant. And you must be very methodical. The way you loop a certain letter also reveals a lot about your personality.

If you have wider loops while writing “l” you’re more relaxed and spontaneous. You tend to have big dreams and hopes.

However, if there are no loops you might be more tensed as you’re restricting yourself more.

If your “t” has loops, you’re very sensitive to criticism and easily paranoid.

However, no loops mean you’re more disciplined and self-controlled.

If you have wider loops while writing “e” you ten to enjoy trying new things and are very open-minded.

But a narrower loop means you’re skeptical of other people. And you don’t get carried away by other people’s emotions.

The Shape of Letters.

The shape of letters you write reveals a lot about your personality as well.

If you write rounded letters, you tend to be more creative and artistic.

And if your letters and connected you’re more systematic, logical, and make decisions very carefully.

You’re signature also tells a lot about who you are as a person.

If your signature is easily understandable and clear enough to read, you’re more comfortable and confident.

But if it’s too hard to figure out, you tend to be very private. You’re also very hard to understand or figure out. As insane as it sounds, even the way you dot your “i” tells a lot about your personality.

If the dot is right above the “i” you tend to have a great imagination and attention to detail.

If your dot is over to the right you’re organized, emphatic, and detail-oriented. But if it’s more towards the left you’re a huge procrastinator.

And finally, if your dot is a circle you’re very playful and childlike. You’re a visionary, artistic, and more likely to stand out from others.

What does your handwriting say about your Health?

If your handwriting consists of a lot of slants within a sentence (or same word) it is one of the indications or early signs of schizophrenia.

If your writing consists of variable pressure, it indicates that you might have high blood pressure.

If you’re one of those people that write very small and all your letters are cramped up together, you might be seeing early signs of Parkinson’s disease.