People say everyone is destined for greatness, however, it’s not a matter of chance but choice. The dreams you see for yourself and the choices you make to fulfill them are what determines your destiny. Speaking of which, the multi-billionaire visionary Elon Musk seems like someone who creates their destiny. However, was Elon Musk destined to colonize Mars even before he was born?

Elon Musk, the CEO and co-founder of SpaceX and Tesla is probably one of the most hard-working people in the world. From dreaming about colonizing Mars to actually working on it, Elon Musk is no doubt a hardworking visionary. Yet, people call him lucky for all the money and success he’s garnered over the years. But Musk has no remorse calling them out and correcting them. 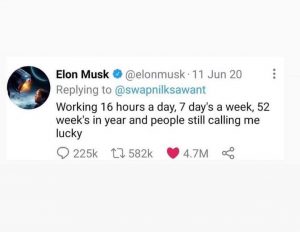 Elon Musk is adamant that he wants to colonize Mars and start a new human civilization there. He also believes that the only lifeline humans have is starting space colonization. But it seems that Elon’s space dreams were a prophecy that was planted way before he came into this Earth. According to a book written in the 1950s, a person named “Elon” would bring humans to Mars. Something Musk has been trying to do with his commercial space flight for civilians.

Elon Musk and a Scientist’s Prediction Regarding Humans on Mars.

Last year, Elon tweeted “Destiny, destiny…No escaping…that for me.” To this, one of his followers mentioned a book and the prophecy written in the book.

Speaking about destiny, did you know that Von Braun’s 1953 book “Mars Project,” referenced a person named Elon that would bring humans to Mars? Pretty nuts pic.twitter.com/m28yFU4Ip6

In 1953, Wernher Von Braun, a German-American astronautical engineer, rocket physicist, and space architect published a book, Mars Project: A Technical Tale (Das Marsprojekt). The book was science fiction where Von Braun fictionalizes what a trip to Mars would be like in the middle of the Cold War. However, what’s so strange about the book is the fact that he mentions someone named “Elon” would bring humans to Mars.

Howbeit, another user clarified the true meaning of the book. “Elon” referred to in the book is not a person. It is rather the name of a position someone elected to take humans to Mars would have.

Yeah it’s real. This is the English transcript of the same book … But “Elon” referred by Von Braun in the book isn’t the name of the person but rather the name of the position something like an elected meritocratic president pic.twitter.com/GADiMJHxLp

Be that as it may, Musk and his dream to colonize and even be buried in Mars definitely commendable. And even though it’s pure coincidence, it feels like Elon Musk was destined to be on Mars.