We all are trying to find more about ourselves. In this process, we will have to understand what gender we belong to. Although for years, the term sex and gender has been used interchangeably, they have two very different meanings. Biological sex refers to your physical anatomy at the time of your birth. Whereas, the term gender refers to where you see yourself in the male and female spectrum. So, there can multiple types of gender in humans, and this is how you can understand the different identities.

As the world is becoming more progressive, we have become more open to these ideas. You might also want to understand the things you never say to an LGBTQ member that might embarrass yourself or hurt others.

In the past decades, there have been numerous regulations passed on these issues. So, if you want to know how many types of gender identities are there in humans, I have mentioned them below:

This is the gender than most of the people in the world associate themselves with. Just because there are more populations in this type doesn’t mean that they are superior in any way. There are various types of gender in humans, and this is the most common of them.

Cisgender people conform to their biological sex at birth. So, whatever the doctor names them during their delivery, the person will associate with the same gender. At birth, the doctor identifies the child’s gender based on their genitalia.

And if you relate to the same category as you were identified in your birth, you are a cisgender.

Conversely, unlike cis, transgender people do not associate themselves with the gender that they were assigned at birth. People also use the term Transgender (Trans) as an umbrella term for people who don’t associate as a cisgender. There are tons of celebrities that we can identify as trans.

Transgender is the exact opposite term to a cisgender. Trans people who were claimed male when they were born might identify as a female identity gender later on and vice versa. Transgender people also undergo surgery to transition from one gender to another.

Many people had to suffer from discrimination for years because they are different from others. Still, there are some places where there aren’t enough regulations to protect transgender people from hate. However, we are working towards a better society. Hopefully, people won’t have to hide their true selves from the public in the future when we understand the types of gender in humans.

In simple terms, bisexual people have a romantic attraction towards both males and females or more than one gender. These people might choose to express themselves in any gender or not. This term is also used interchangeably as pansexual. However, there are ways in which these two types of gender identities in humans are different and will be explained below.

Also known as omnisexuality, pansexuality is the romantic attraction to people regardless of the sex or gender that they identify with. So, to clear the confusion, all pansexual people are bisexual, but all bisexual people might not be pansexual. Pansexuality is one of the branches of the bisexual gender. 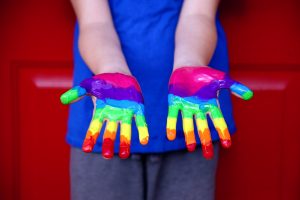 Moreover, people are opting to use the word pansexual compared to bisexual because the latter gives more weight to the gender binary concept.

Also known as non-binary gender, genderqueer is a gender that doesn’t exclusively lie in the spectrum of masculinity or femininity. A genderqueer person may sometimes identify having two or more genders. This is another very new type of gender identified in humans.

Most of the time, this term is also used by people to challenge the social construction of binary gender concepts specifically. Some genderqueer person can also identify themselves as gender fluid.

The common understanding that we have about the bodies and male and female sexual parts do not explain intersex people. Intersex people are born with a variation in their hormonal, sex hormones, or genitalia as compared to binary people.

These types of variations are explained through medical conditions where the people associated with male or female chromosomes. Medically, the term “disorders of sexual development” are used to identify with such conditions. So, this type of gender in humans is essential to understand and has a medical scope as well.

This should not be confused with the term asexual, which is the same as cisgender. The people who identify as Agender use they/them pronouns instead of the usual his/her. An agender would claim to be genderless and have no particular gender to identify them with.

Finally, it might be a little confusing to understand that there can be more than one type of gender in humans when we live in a world where it is still not very accepting. But people need to understand, however, that there are people who do not fit into the fixed category of male and female genders.

Also, we need to understand that there is a range of gender identities and sexualities that we might not be aware of. People need to learn to be more accepting and understand what phrases not to use.

Why Bossy Girls Are Better At Sex, Life, and Relationships?
What’s It Like to Live With Transgender Parents