We as a global society are in the era of enhancing ourselves. And creating an impression among the people we surround with, is a must. This is where make-up/Cosmetics barge into our lives. Makeup up changes how we want to present ourselves. Now, is a makeup tutorial for how to look “NATURAL” is that even natural? Who’s to say that makeup products don’t contain toxic chemicals that can harm you?

Cosmetic commercials take all the credit for the confidence it brings you with breaking yours. But honestly, is the makeup that we use safe enough? Can you recall someone who is a regular makeup person? Think they look sick/old without makeup?

It is a very subtle thing to observe yet a matter of serious concern. In the era of cake face covered with heavy foundation and contouring, we forget to ask if it is really safe for us. Even after ages of demanding safer cosmetics, are they really safe? And the truth is, it isn’t. They use enough toxic chemicals in makeup that in exchange for giving you confidence can harm your health. 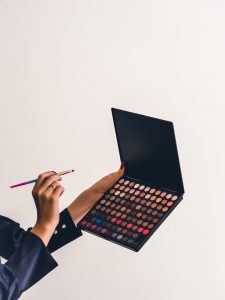 Who figured this out?

The University of Notre Dame found substantial evidence of per and poly-fluoroalkyl(PFAS) in cosmetics. Also, the researchers found the substance in more than half of popular cosmetic brands. Most commonly added in water resistance and long-lasting products.

Republican Senator Susan Collins of Maine and Democratic Senator Rechard Blumenthal of Connecticut proposed a bill to ban the entire class of chemicals.  Prior to that, Europe has put a ban on specific PFAs where manufacturers substitute the chemicals.

Why are PFAs bad?

PFAs contain substances causing cancer and high cholesterol which you obviously wouldn’t want on your face. Lipstick users eat away pounds of lipstick within their lifetime. But sadly, chemicals in lipstick and makeup don’t digest like food in our bodies. However, these chemicals aren’t regulated in the United States and Canada. According to the industry, the problem is endemic to the cosmetics industry, which is why one particular company isn’t to blame.

Why bring the issue now?

The study was a five-year project with three countries making the effort. Also, were 16 researchers within five university and green science policy institute. First, they purchased 231 products Target, Sephora, and Ulta Beauty. Later, the product ingredients were screened.

Here is what the researchers found the indications of PFAs in

Know that many of the products containing PFAS were advertised as “long-lasting” or “wear-resistant.”

Why PFA in makeup?

Arlene Blum, the co-author of the study and executive director of the Green Science Policy Institute, points out that PFAS are not necessary ingredients in makeup and should simply be banned. Meantime, researchers call for stronger labeling regulations. Uncertain about what to wear to your favorite country star's next concert? Here are some tips for accessorizing your outfit to make it a guaranteed... Merge your summer wear with fall staples. Discover how to transition your summer style to fall fits in three different stylish and practical ways.