Even in the 21st century, menstruation and sex is a taboo in most parts of the world.

Women are still living in fear that their menstrual cycle will offend a man. Or as if it is something they’ll be hanged for if discussed.

But what everyone needs to understand, whether men or women is that it’s a natural thing that happens to every woman on earth.

On average, a woman spends 3,500 days of her life menstruation. Women spend roughly 40 reproductive years with the menstrual cycle, i.e. about 450 periods in one’s lifetime.

1 in every 7 women you encounter is on her period right now. So, cringing over anytime one brings up the matter is not a wise thing to do.

In fact, learning about it would be better for all the men so you could deal with it better.

Even though talking about a woman’s period has been deemed taboo, it’s not. And there is nothing wrong with a man wanting to learn more about it.

There are so many things a man should know about a woman’s menstrual cycle. This will not only help men know how women work, but it’ll also help women feel more comfortable talking about their problems.

Here are the things men should know about menstruation.

PMS is real but it’s not like the movies. Listening to Amy Schumer crack period jokes might cringe you (it’s disgusting really) but men should know it’s nothing like what they show it in the movies.

No woman is going to throw flower-vase at your face and scream their lungs at you just because you didn’t get the right ice-cream.

The hormones fluctuate a lot during the period that leads to PMS. There are also chemical changes happening in the brain that leads to it.

We do experience mood swings and crave for chocolates but that is not it. Different women experience different types of PMS.

Most women get acne and breakouts while some have sore breasts. Some of them feel bloated while a few get diarrhea.

So clearly, no one turns into a blood-filled devil ready to swallow you whole. Yes, we bleed every month through our vagina. But if you think that the way the blood comes out of our private parts as if a pipe got loose, then you’re wrong.

There are so many things happening inside our bodies. A regular cycle is about 23-35 days. And in every cycle, the extra blood and tissues get added to the lining of the uterus.

An ovary then releases an egg for fertilization. Uterus’ lining is where a fertilized egg attaches and grows.

If the egg isn’t fertilized or if pregnancy doesn’t occur, the extra blood and tissue expel from the body.

Therefore, the blood we bleed isn’t just plain blood. It also contains dissolved remnants of a tiny egg and clots of endometrial tissue.

And an entire menstrual cycle only releases a cup of blood.

Every woman is different and so is their cycle. Since everyone in this world is different, don’t expect two or more women to have a similar experience during their period.

Some women bleed for just 4 days while some bleed as long as 7 days. Some get serious back aches while some have really tender nipples.

So, it all depends on the health of the woman, for example, the hormone levels, weight, age, medications, etc.

Different sizes of tampons/pads are for the levels of flow. I’ve seen men getting confused over maxi-pads and regular-sized pads. The crazier part is that they think the sizes of pads and tampons varies according to the size of a woman’s vagina.

Since every woman has a different cycle, so is the blood flow in them.

Some bleed heavily for their entire period while some shed just a little. Therefore, some women carry around a whole pack of pads with them at all times.

So, don’t start assuming that just because there are different sizes of condoms varying on the sizes of the penis, it’s the same with the tampons and pads.

The sizes of tampons and pads vary according to the levels of one’s flow. If you have a heavy flow, you use maxi-pads. If it’s less, you use regular pads. Normally in schools teachers teach that women can get pregnant anytime, anyplace, and anyway if you don’t use protection.

But as we grow up we learn that it’s not entirely true. There is a whole another cycle of how one gets pregnant that we’re not discussing here.

However, there is a misconception that women don’t get pregnant if you have sex while she’s on her period.

Although period sex might be great but don’t be fooled, women might still get pregnant if you have period sex.

Firstly, because women might mistake their ovulation blood (the one they get when the ovaries release an egg) to the period blood. Women are more likely to get pregnant if you have sex around this time.

Secondly, women might start ovulating even before their period is over or just a few days after the bleeding stops.

So, using a condom will not just prevent unplanned pregnancy, it’ll also save you from the risks of STI transmission. 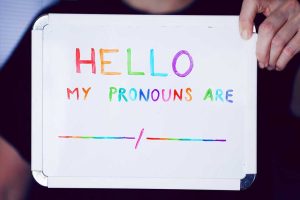