Intelligence is not only used for good purposes. Some think that a life of crime pays better than the life of a working man/woman and decide to use their mental capabilities in order to rob, deceive and even murder people.

Some of the most infamous criminals were genius. Police could not arrest them, some escaped from prison, while others assumed different identities in order to do their “job”. He was the inspiration behind the film Catch Me if You Can (and Leonardo DiCaprio portrayed him). Frank William Abagnale Jr was a notorious impostor.

By the age of 21, he had assumed the identity of a pilot, a lawyer, and a doctor. He even managed to escape from police custody twice (once from a taxiing plane).

Finally, the FBI decided that his intelligence was too valuable to waste and made him an FBI consultant. Today he runs a financial fraud company.

He wanted to begin a race war and he used his charisma to achieve it. He gathered people around him, created a cult and called it the Manson Family.

In the late ’60s, he went on a murdering spree in California, which resulted in the murder of Sharon Tate, Roman Polanski’s pregnant wife. Police arrested him and sent him to prison. Even there, however, he became a popular culture icon. 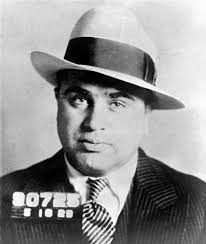 The famous mobster had achieved star status in his city of Chicago. He had the support of the local people due to donations to local charities and people even cheered when he appeared in ball games.

Locals even called him “Robin Hood”. Well, at least that was the case until Al Capone’s gang murdered seven members of an opposing gang in broad daylight. Police were not able to catch him. Capone was finally arrested for tax evasion.

Before becoming a terrorist, Ted Kaczynski was a mathematical genius. He was accepted in Harvard at the age of 16 and got a Ph.D. for math from the University of Michigan.

Instead of using his intelligence to do good, Ted Kaczynski became a bomber. He is serving a life sentence for bombings that killed three people and injured more than 20. The man from India had a smart plan: He managed to convince people that they could buy Taj Mahal. He actually “sold” the monument three times.

He also sold the Red Fort, the Rashtrapati Bhavan and the Parliament House of India with its sitting members. Mithilesh Kumar Srivastava was a lawyer before he became a con-man. He was a master of disguises and used more than 50 aliases. Brothers in crime. In 2009, a robbery took place in KaDeWe in Berlin, Germany. The jewelry stolen was worth almost 7 million dollars.

Police found traces of a man’s DNA. However, since the man had a twin brother, the police could not determine whose DNA it was. Neither spoke and police had to release both of them.

A famous French bank robber, Albert Spaggiari was a photographer who planned a bank robbery in Nice in 1976. When police finally caught him, he escaped by giving the judge a fake piece of evidence. Then he jumped out of the window on a motorcycle that waited for him.

He managed to escape custody until his death from throat cancer. Someone left Albert’s body on his mother’s lawn.

His nickname was “The Napoleon of Crime”. Adam Worth broke into vaults in the US during the 17th century. He is the inspiration behind the criminal mastermind in the Sherlock Holmes books, James Moriarty. Worth started as a pickpocket and later became infamous because of his ability to change identities throughout the years. He was one of Canada’s most sophisticated criminal masterminds. Gerald Blanchard managed to steal millions from financial institutions. Moreover, Blanchard stole the Star of Sisi, a jewel from the Austrian Crown from inside the Vienna castle.

Blanchard switched the original with a replica he bought from a tourist shop. It took the police two weeks to find out the switch. He orchestrated complex frauds and robberies in three continents. He was finally arrested in Canada and offered to recover the jewel.

Are Chinese Hospitals Hiding a Big Secret?
Weirdest Jobs around the World