First The Jungle Book, Beauty and the Beast, and later the Lion King 2019, Disney has built up a heavy roster of live-action remakes of their most beloved animated movies.

Yet from all the above mentioned movies, nothing compares and anticipates the audience like the Lion King 1994.

Since then, the Lion King has always been known as a movie about power, family and monarchy.

And now, after 25 years of time, Disney has remade the Lion King with its sights set on the coup of a century to bring nostalgia among the audience.

Released on July 19, the Lion King 2019 has managed to make piles of money through heavy marketing, and exiting fans with nostalgia.

Plus the casting of Beyoncé as one of the favorite character of all time, Nala, was more than what fans had ever expected.

However, creating a movie that bests the beloved original one is lot more easier said than done. And same goes with the new Lion King.

According to film critics, the new Lion King 2019, has failed to match up with the original Lion King released in 1994 in a lots of ways.

So, what exactly changed in the remake of the Lion King 2019 from the original 1994 animation that made the critics review not so well? Timon and Pumbaa are of considered as the heart of humor for the better and worst in the Lion King.

However, some things about Simba’s best pals Timon and Pumbaa have changed drastically between 1994 and 2019 in the Lion King.

Pumbaa’s fart jokes have been amped up, which has the unfortunate effect of making them less funny.

Back in the Lion King 1994, the pair’s “hakuna matata” philosophy made them seem like charming stoners.

However, now in the Lion King 2019, their character sort of seems like narcissists more than charming and funny. Rafiki isn’t a baboon. Well, he never was a baboon neither in both of the Lion King movies.

Rafiki was always a mandrill. But, the slightly unusual and idiosyncratic advisers gets a more accurate depiction of what that means.

While many audience might not notice the features in particular, but the fan of the Lion King definitely will.

In the Lion King 2019, the long tail of Rafiki is gone, and his features are more in-line with a mandrill’s.

However, the new Rafiki still swings from trees pretty fast, which isn’t something that a lazy mandrill would do.

In the Lion King 2019, the older, wiser Rafiki who always speaks in his native tongue is more savage version of Mufasa’s old friend. Zuzu, Mufasa’s adviser voiced by Rowan Atkinson was a sassy red-billed horn-bill in the Lion King 1994.

However, the character has undergone through few changes in the new Lion King 2019.

While he is still seen as an annoyance for the young cubs, he doesn’t get bullied quite so much.

This Zazu in the Lion King 2019 isn’t caged and forced to sing to Scar.

In fact, he actually sneaks back to Pride Rock when the hyenas take over the continue giving the Morning Report to Sarabi.

Zuzu even joins the final battle to reclaim Pride rock swooping in to help Simba in the Lion King 2019. Shenzi, Banzi and Ed were one of the most recognized character in the Lion King 1994.

These dimwitted cackling hyenas were voice by Whoopi Goldberg and Cheech Marin in the original movie.

The trio were Scar’s henchmen who helped him to take over Pride Rock.

However, the hyenas return in the remake of the Lion King has drastically shifted.

Shenzi returns in the movie, but only in the name as the new character.

She leads the pack, is a lot scarier and now has a rivalry with Nala.

The other two hyenas have had name changed into Kamari and Azizi as Disney opted for more recognizable African names.

The Lionesses Take A Stand

The new Lion King story takes a bit of backseat to Simba and the male lions.

However, a few subtle changes have made including Sarabi and Nala taking stand up for themselves.

Sarabi also gets a backstory with references to her rejecting Scar and choosing Mufasa. Nala escaping from Pride Rock is fully bumping up the remake of the Lion King’s story.

In the Lion King 2019, Nala actually makes it out to find Simba which is the most exciting part of the movie.

The character gets a sub-plot of sorts too in her rivalry with Shenzi, the lead hyena who threatened the cubs when they ventured into the Elephant’s Graveyard.

This pair meet in the Elephant Graveyard but it makes enough of an impression that Shenzi is gunning Nala.

Can You Feel the Love Tonight In the Lion King 1994, the song plays over the romantic sequence and is quite similar in the new Lion King as well.

But the realistic remake was always going to struggle to cover two hormonal lions in a loving way.

The original song in the Lion King 1994 manages it through facial expression, soft tones and a twilight feel.

However, these things are out of reach in the new Lion King movie.

Also, that weird and sexy look that Nala gives Simba in the original Lion King is gone in the new movie.

Instead they start at each other as they lie next to one another after rolling around and that’s just it. 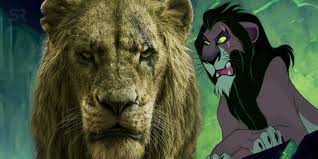 There was quite a rumor that the song “Be Prepared” would be eliminate from the Lion King 2019.

Fortunately, that didn’t happened and the album soundtrack was released.

In the 2019 song, audience loosely see Scar walking among the hyenas promising them a brighter future if they stand with him.

Also, the Nazi-style walk which was most famous in the Lion King 1994 is gone.

More than that, it’s unclear what the vision was for the “villain song” without the walk.

Audience are left missing lines like, “You won’t get a sniff without me!” and “wet as a warthog’s backside.” In the new Lion King movie.

Worst Movies of All Time, According to the Critics
Netflix’s New Horror Series Marianne is The Scariest Show Ever