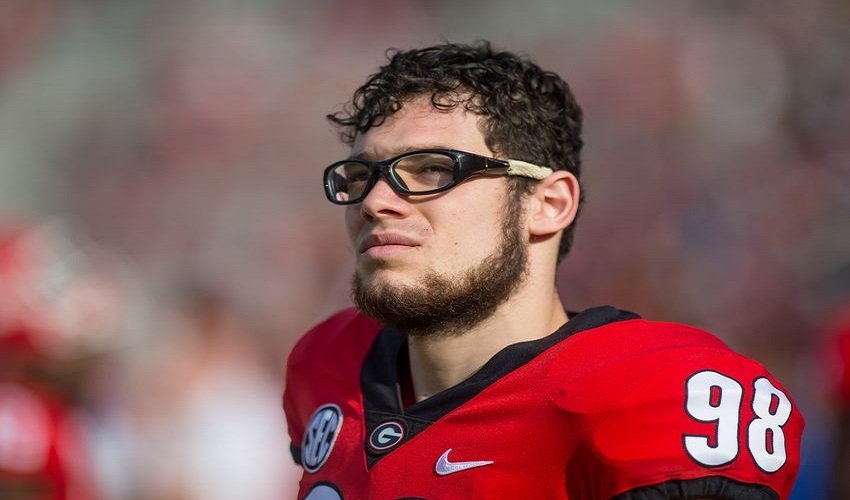 Rodrigo Blankenship is a professional American football placekicker who currently plays for the Indianapolis Colts of the National Football League (NFL). During college year, Blankenship played for the Georgia Bulldogs. Fan and the teammate call him by “Hot Rod” (nickname). Moreover, Rodrigo joined Georgia as a favored walk-on in 2015.

The 23 years old, Blankenship has been active in the sports field since his enrollment in Sprayberry High School. Well, if you are curious to know about his personal life and relationship detail, here we provide all of his necessary facts. Also, how much his total net worth in 2020? Know about his draft, career, height, weight, facts, biography, age, and other interesting information in the following section.

Rodrigo Blankenship was born on January 29, 1997, in Marietta, Georgia. From early childhood days, he was actively involved in soccer. Moreover, he is a proud son of Ken Blankenship, father, and Izabel Blankenship. Rodrigo is American by nationality and belongs to white racial ethnicity.

He has not disclosed his siblings yet to the public. Blankenship attended Sprayberry High School. Matter of fact, he served as a high school scholar in the All-American Army Bowl from 2014–15 U.S. Blankenship has been ranked ninth-best kicker in the country by 247sports.com.

2) Who is Rodrigo Blankenship Girlfriend?

The popular American football placekicker Rodrigo Blankenship is an attractive individual with a humorous personality. As per our research, we came along with the fact that he is currently dating Logan Harrell. Further, the duo has been in love affair since 2016.

On February 15, 2019, during the College Football Hall of Fame and valentine day, Rodrigo flaunts his photo with a girlfriend, Harrel on his Instagram with a caption:

Particularly, the caption Rodrigo wrote along with the picture pretty much indicated that they are into inseparable romantic relationships. Moreover, the handsome hunk might have dated a few girls in the past.

On the other hand, he has gained more than 95.8k fan followers on his Instagram account where he prefers to upload his photos on a regular basis. Seeing Blankenship career-related photos on social media, he seems goal-oriented too. In particular, he remains low profiled and favors to be away from the media’s lens.

On the other hand, Rodrigo loves his teammate’s company. Additionally, he frequently goes on vacation with family members and friends. As of 2020, he is living a quarantined life like most of us. Currently, He is spending time with his favorite dog, Arbor, and Tony.

Rodrigo Blankenship joined Georgia as a favored walk-on in 2015 and red-shirted his first year. Blankenship made a record-long 55-yard field goal in 2018, Rose Bowl which proved to be vital in shifting the momentum away from Oklahoma, leading to Georgia’s eventual 54–48 comeback win.

Rodrigo ended the 2017 season with 20 of his 23 goal trials on the field and all 63 extra points. Rodrigo was picked for the All-SEC First Team preseason in July 2018. Further, he went 19-for-23 on field-goal attempts during the 2018 season and made all 65 of his extra-point attempts.

Rodrigo Blankenship stands at the height of 6 ft 1 in which is 1.85 m where his weight is 217 lb (98kg). He has an attractive pair of black eyes and the color of hair is black in nature. Another detail of his overall body measurements such as the chest, biceps, and the hip is currently unavailable.

Rodrigo Blankenship who plays in the position of Placekicker has a whopping sum of money which is reported to be $300,000 in 2020. Matter of fact, he is currently signed under three years contract with the Indianapolis Colts worth $2,305,000. Also, his signing bonus with Colts is estimated to be $20,000.

Additionally, he earns from the endorsement, sponsorships, and ads. He is associated with famous brands like Nike. His source of income comes from social media appearance. As mentioned, Rodrigo has massive fan followers (95.8k).