It is very hard to find people who don’t know about the viral videos of Nas Daily in Facebook Pages.

It’s been almost a month that I have been following his work and it has always been motivating.

This blog is all about how Nas Daily makes one minute video and earns millions per day.

He describes himself as Palestinian-Israeli. Making millions with his videos was not his first intention. But looking at his work you might think he is worth it.

If you are new to travel industry and want to make you’re living out of doing 9 to 5 job, Nas daily might be helpful for you. 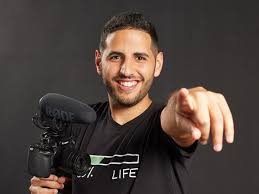 Nas Daily was making more than 120k per year with his job. When he left his job he saved up to $60K with the only intention to travel.

This is when he understood he did not have enough money to travel and promote his contents.

This $60K was the only investment to build his brand.

When he started to make his blogs, he took it as a company because he had a vision to make a living out of it.

He did not limit his audience to his friends and families.

His contents are so interesting, powerful, and knowledgeable that it never bores anyone.

Even for a professional blogger, it takes more than ten minutes to explain the content to their audience.

But Nas Daily does not. Every aspect of his content are explained so well within one minute that audience never get a chance to be bored.

Love What You Do

Nas Daily has more than 4 million plus followers and the number is growing every day.

It’s easy to think that he makes 1 minute video travelling the world but actually it takes lots of time and effort than any one hour video.

To make 1 minute video he has to shoot around 6 hours per day, fly to different countries, make creative stories, and do lots of other stuffs.

After doing that, he needs to edit it which takes around 3-4 hours each day.

Sometimes, it may be harder than doing a 9 to 5 job. But the only thing to get it to success is you need to love what you do.

Nas Daily loves his job, that’s why he is able to show such passion in his work and gain lots and lots of followers.

Connect with the Followers We spend hours daily on our social media accounts.

Many times we scroll the contents without reacting to it even though it might be very interesting or important to us.

It happens when we don’t know that person or don’t care about the content.

Nas Daily publishes useful content but most importantly he appreciates his fans and followers through responding to their comments which many of the vloggers do not.

This makes people feel connected and important which makes them share the posts or videos more and more.

Not only that Nas Daily also creates meet ups during his trips with his fans and followers, giving then more emotional attachment.

For those who think they are passionate about travelling and want to make their living on it, Nas Daily is going to be great for you and for those who do not love travelling.

I recommend them as well to watch Nas Daily videos because once you watch his videos you will fall in love with his works.

He is definitely going to be one of the biggest trend setters someday.

So, don’t make yourself look like a fool in front of people when they start talking about him and appreciating him and you know nothing.