Dogs are really good at communicating with humans. Their communication skills are one of their great companions. They wear their emotions on their face to communicate.

Furthermore, they also show different activities for more than most non-human animals. They are aware of watching us, they have learned the facial clues to respond and learned that humans are visual creatures. So, does this mean they’re manipulating you?

Dr. Juliana Kaminski at the University of Portsmouth’s Dog Cognition center filmed dogs in different contexts. The film shows the presence of humans’ influence in their facial expressions. It was known that dogs are sensitive to humans attention.

Moreover, their expression can communicate well with humans. They show different facial expressions such as bared teeth to show their aggression as well as pastures while communicating with humans.

The Facial Expression of Dogs: Dogs show different facial expressions to express their emotions. Raising the eyebrow makes their eyes look more adorable. They commonly raise their eyebrows when they had human attention.

You will see your pet’s tongues and vocalize more when you are watching. There is a great change in both dogs and humans due to thousands of years of domestication. The previous study shows dogs steal food in the absence of humans and follow the human gaze if eye contact is made.

Dogs generally elicit their expression to elicit a human response. Although some human expressions are involuntary there is a general assumption. The facial expression of animals is based on their internal state than their audience.

Your pet is likely to react to fearful stimuli with his whole body. Their body language might show several signals and appear as a progression as their response intensifies. Furthermore, he may lick his lips or yawn, keep his mouth tightly closes, lower his body, put his year back, and so on is perceived as frightened.

However, the absence of active signals is considered an active signal. When your dog doesn’t eat anything, avoid people, freezes, and so on are demonstrating fearful communication. Also, aggressing body language if the fearful stimulus continues. Dogs generally demonstrate high arousal and excitement behavior. There are various factors for your pet being excitement including age, personality, confinement, and lack of physical and mental outlet. It is the response to something that your dog likes.

However, such behavior can also be due to something that your pet doesn’t like. Arousal signals to an unfavorable stimulus may be couple with fear signals. Also, pair with aggressive signals including braking with anxious signals.

You’ll love to see your pet in a relaxed position. Your dog seems to appear not to have care in the world. His mouth looks relaxed with slightly opening with ends.

Moreover, his head and ears are in a neutral position with a loose body and soft eyes. Your dog will often be lying down, even sometimes in ‘frog-leg position.

Also Read: Are Dogs Really Similar To Their Pet Parents? 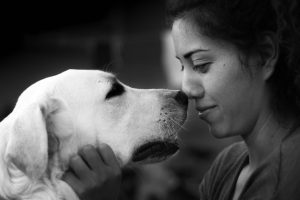 Pets and Animals • Self

Key Differences Between A Dog Person And A Cat Person

Comedy Wildlife Photography Awards: Hilarious 2021 Finalists
Struggling To Bond With Your New Pet? Here Is How