The advanced generations like 4G LTE technology boosted cellular networks to offer speed and reliable Internet services. The cellular operators bid for the spectrum or radio networks to provide undisrupted transmission for their users. Others can not use such licensed spectrums. But the operators have to pay a great price for licensed spectrum, which is overwhelming as the spectrum requirement grows, demanding higher bandwidths.

Besides, the spectrum bands are not sufficient for the growing number of cellular networks.  This issue forced the operators to seek Unlicensed Spectrum, especially in the 5GHz ISM band. With the regulatory requirements and protocols, one can utilize the unlicensed spectrum without any cost. Pioneered by Qualcomm, LTE-U (Long term Evolution) is a hot topic in the networking industry. In contrast, the spectrum crowding by cellular networks seems to have negative impacts on pre-dominant Wi-Fi networks that operate in the same spectrum.

The researchers picked a book station near the UChicago Campus privileged with campus Wi-Fi. They used smartphones to access cellular data and laptops to connect to the local networks for the experiment. The research team then analyzed the performance of the networks under different circumstances. This included streaming videos, opening websites, loading websites, sending emails, and many more. The team relied on software that interpreted the statistics of data traffic to scale the performance of the networks.

The research concluded the poor network connection whenever simultaneous network connections were established. Low data transmission, weak signal, and reduced transmission speed symbolized the drop in network quality. This happens as the base stations of the LTE interferes with the Wi-Fi Access Point residing in the same channel.

According to Scitech, the experiment showed the impact was significantly higher in Wi-Fi than LTE. LTE-U transmitted 35 % fewer data during the sharing while Wi-Fi lost more than 95% transmission rate.

The decline in the network strength in the shared spectrum band stems from the mechanisms of cellular and wi-fi networks to manage the data traffic. In this regard, the network operators adhere to the Industry standard called LAA (Licensed Assisted Access), based on the LBT (listen before talking) principle. 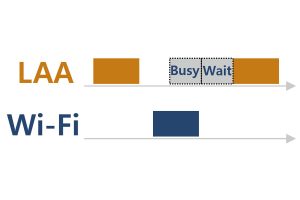 This principle organizes the multiple transmissions requests in queue and assigns them different waiting periods allowing a single transmission at a time. However, carriers hold on longer to the medium or spectrum channel than the Wi-Fi networks, which gives them the upper hand. Although the issue also exists in similar network types, the scenario worsens, especially in the Wi-Fi/LTE-U combination.

The carriers may benefit from offloading the traffic into the spectrum, but it is bound to serve a small customer base, unlike the Wi-Fi users. Being predominant users and exclusively relying on the license-free band, the increased growth of LTE-U concerns the Wi-Fi community. However, the competitive environment is ruling out customer satisfaction. Despite the modifications in Industry protocols to address the issue, the problem persists. Industry experts and researchers are striving to come out with algorithms and policies to bolster co-existence.

For further reading, we recommend:

Google Play Store Tosses Out 9 Apps for Stealing Facebook Details
What Is The “Right To Repair” Movement?