When we talk about sitcoms, there’s no way we miss one of the greatest TV shows, Friends.

It’s already been 25 years since we were introduced to Phoebe, Rachel, Monica, Chandler, Joey, and Ross.

I’m sure you must be feeling nostalgic at this moment.

You must be remembering the times when you first sat down to watch the first episode of Friends.

So, let’s take a walk down the memory lane and remember some of the best episodes of Friends.

No doubt, Monica and Chandler’s love story is one of the adored one among all the episodes of Friends.

Monica and Chandler, also known as Mondler started in the season finale episode of Season 4 and has been everyone’s favorite ever since.

Their chemistry that definitely takes the cake from Friends TV show after they start dating each other.

The pair showed the world that you don’t need unnecessary drama to show your love to each other.

In fact, Monica and Chandler’s chemistry made many fans to doubt their own relationship with their partner.

Now, as Friends has completed 25 years, let’s take a look at times when their romance became relationship goals for couples. 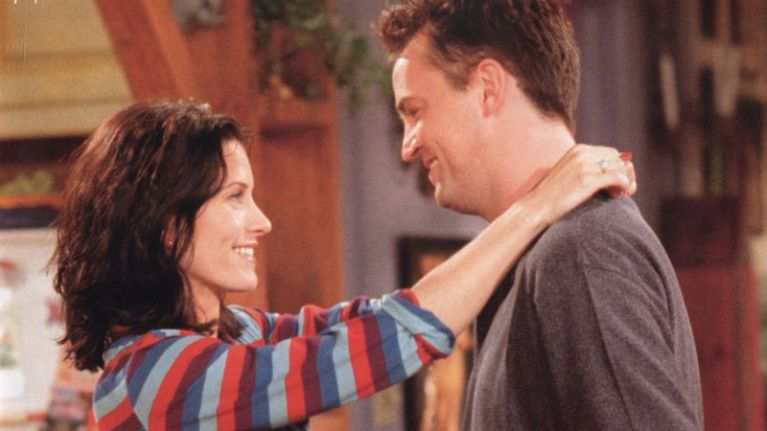 Monica and Chandler have known each other since they were in their late teens.

They met at Thanksgiving 1987, when Monica was a Senior in high school and Chandler was Ross’s freshman College roommate.

However, their relationship got off to a rocky start when Monica started developing a crush on Chandler.

They became close friends when Chandler moved into an apartment next to Monica.

Later, at Ross’s wedding at London, they hooked up with each other.

Gradually, the friendship turned into commitment and passion for both of them which ended up as marriage.

Always There For Each Other Even when these two were friends, Monica and Chandler never out on an opportunity to cheer each other up.

For instance, in one episode Monica helped Chandler to lose weight.

Their friendship became stronger with every season.

In fact, Monica and Chandler’s friendships created the perfect foundation for an everlasting relationship.

First I Love You

Remember the episode when Chandler was upset for not being Monica’s first choice?

And then Monica decided to put a turkey on her head and dance to make Chandler smile?

If this doesn’t show how much she cared for him what else will?

Chandler was so moved by this that he ended up saying ‘I Love You’ to Monica which even he hadn’t expected.

That was the moment which turned the whole series into a next level.

The proposal is one of the best thing that happened in the show.

In fact, it’s the best thing that happed in any show ever.

While Chandler had his own plans to propose to Monica, it turns out to be quite opposite.

Chandler lied to Monica, to make the proposal a surprise.

Somehow, Monica got annoyed for the fact that Chandler didn’t want to get married.

Eventually, she turns out to Richard whom she had met recently after her breakup with him.

However, as the destiny had plans for Monica and Chandler, it is the doting chef that got in the last word.

This episode literally gave audience a heart attack even by thinking stuffs like “what if Monica marries Richard or what if it’s too late for Chandler.”

Nothing sums up the Mondler relationship better than their wedding vows.

Chandler said, “I thought this was going to be the most difficult thing I had to do, but when I saw you walking down the aisle I realized how simple it was. I love you. Any surprises that come our way, it’s okay, because I will always love you. You are the person I was meant to spend the rest of my life with.”

Monica’s vows were, “I wondered if I would ever find my prince, my soul mate. Then three years ago, at another wedding, I turned to a friend for comfort. And instead, I found everything that I’d ever been looking for my whole life. And now…here we are…with our future before us…and I only want to spend it with you, my prince, my soul mate, my friend.”

When Chandler moved to Tulsa, Oklahoma, Monica decided to go with him leaving her future behind.

However, when she got the opportunity of a lifetime in New York, Chandler fully supported her.

Even when a colleague tried to flirt with Chandler and said it to be okay because she was also married, Chandler replied that he was happily married and couldn’t cheat on his wife.

Monica and Chandler made long-distance relationship so romantic and effortless for everyone.

Possibly the most heartbreaking scene of the show, when Chandler convinced a young mother Erica to let him and his wife adopt her kid.

He said, “My wife’s an incredible woman. She’s loving and devoted and caring… and don’t tell her I said this, but the woman’s always right. I love my wife more than anything in this world. And… it kills me that I can’t give her a baby. I really want a kid. And when that day finally comes, I’ll learn how to be a good dad, but my wife, she’s already there. She’s a mother without a baby. Please?”

Every time we watch the show, we can feel how deep and passionate those words that Chandler spoke were.

We can see nothing except love, passion and respect in both of their eyes.

Tom Hanks To Be Honored At The Golden Globe Awards 2020
Worst Movies of All Time, According to the Critics