Find Out If You Are One of the Narcissists What a narcissist would say

Ancient Greeks and Romans had a myth about someone who was a little too much obsessed with his own image. His name was Narcissus. Since he was so full of himself he didn’t even care about the needs of other people. He rejected anyone who approached him for marriage as he was too proud of himself. One day, Narcissus saw his own reflection in the river but he couldn’t tear himself away. Consequently, he drowned in the same river. A flower marked the spot where he died. Since then, we all call that flower The Narcissus.

We can apprehend the ideology of narcissism from Greek mythology. Narcissism is a behavior of adoring oneself to the extent that you don’t care about other people’s opinions. We call such people Narcissists. Narcissists are so full of themselves because they think they need to be treated superiorly to others. 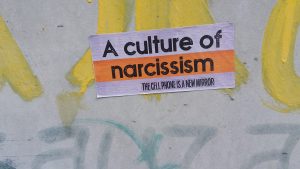 One might not be able to differentiate between self-love and narcissism. These terms may sound similar but are two different ideologies. Self-love is being happy and taking care of yourself for your well-being. It’s about getting to know one’s happiness and oneself better.

While, narcissism is the uttermost interest in oneself, one’s pride, and one’s physical appearance. Moreover, narcissists don’t even realize the effect of their behavior on the people around them because they are patronizing and selfish. Surprisingly, we all could be a narcissist in some way. However, It depends upon which spectrum we fall under. It can be considered as a trait but when we fall under the extreme spectrum. That might even suggest Narcissistic Personality Disorder(NPD) as said by The British essayist and physician Havelock Ellis in 1898.

Psychologists say that there are two forms of narcissism as a personality trait. It depends upon how they were raised as a child.

These kinds of narcissists are dominant, extraversion, attention-seeking, and aggressive. That’s why these narcissists mostly aspire to power and attention. Being said that, not all celebrities or powerful personalities are grandiose narcissists. Grandiose narcissism could be a result of parents heroizing their children overly.

Likewise, are you curious if you, one of your friends, or your partner is one of the narcissists? Here is the link Narcissism Spectrum Test to find out how much of a narcissist you are. All the best! May our existence make other people’s lives better not worse.