The social media giant, Facebook Inc. has announced the suspension of Trump from its platform for the coming two years. It also includes his Instagram account. The ban on the former President of the United States was a bold move by Facebook.

Facebook imposed the restriction as a reaction to the Capitol riot that took place on January 6. The officials stated no one has the authority to use social media platforms to encourage violence. And they had investigated and found Trump influencing the riot via Facebook.

Initially, Facebook suspended Trump’s access to Facebook for at least two weeks implementing from January 7. Later, the Global Affairs Committee referred the decision of indefinite suspension on Trump to the Oversight Board on January 21. The Oversight Board is an independent body that takes decisions on matters and issues of complex nature. Donald Trump was believed to instigate the violence which halted the victory confirmation of his successor, Joe Biden. Nick Clegg, VP of Global Affairs defined the necessity of the suspension as “It was an unprecedented set of events which called for unprecedented action.”

The board criticized the vagueness of the suspension and termed it as an “indeterminate and standard less penalty.” The Board urged to review and come with a more clear and proportionate decision.

As recommended by the board, Facebook has now enforced policies to deal with similar cases in the future.  This protocol declares the penalty duration for public figures that contribute to civil unrest and any forms of violence. Based on the protocol, the action of Trump is liable for the highest time penalty available that is 2 years. The suspension will end by January 7, 2023.

However, experts at Facebook will assess the risks of release around the end time. If the release is likely to induce risks to public safety, Facebook will extend the suspension period until the risks subside. It also said under further violation of rules by Trump after his restoration to the platforms, he could be permanently banned from Facebook.

Nick made it clear that the penalties imposed by Facebook on such a huge personality would be controversial for any possible alternatives. The interpretation of Trump on the censorship of Facebook reflected condemnation. He described the suspension as an insult to his voters.

Despite the criticism, Facebook believes the suspension is justified for the conspiring acts of Trump that obstructed the peaceful transition of power. Facebook was not alone in standing against the social media rules violation.

Trump was more of a Twitter person where he had around 89 million followers. The platform was a source to view the musing announcements and messages of Donald Trump. But the deadly riots lead to the banning of Trump from Twitter as well. Trump violated Civic Integrity Policy and Twitter did not delay in taking strong actions. Unlike Facebook, the officials of Twitter stated that once banned from the platform, the restricted account will not be restored.

Following the bans, Donald Trump moved on to a blog named ‘From the Desk of Donald J. Trump’, where he expressed his thoughts and issued statements. But his senior aide, Jason Miller confirmed to CNBC that the blog has been taken down recently and is not intended to get back live. There are rumors of Trump launching a ‘new platform’ soon to connect with his supporters.

Why the big tech giants are suddenly driven to act against conspiracy theories and extremism is interesting. Well, it can be a desperate act to please current leadership, Biden, who believes the tech companies have not established strict policies to eliminate fake news and hate speech from their platforms.

Also Read: Most Controversial Things Donald Trump Has Ever Said. 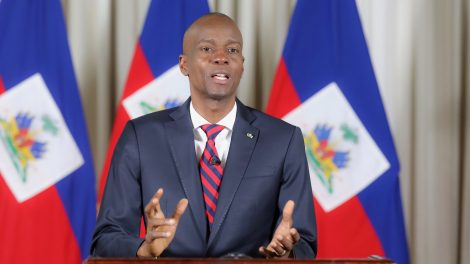 Haitian President, Jovenel Moïse was killed in his own residence at Port-au-Prince. The conspicuous incident happened in the early hours of...