A good folklore story can certainly make the hair stand up at the back of neck and give Goosebumps.

Yet, the same folklore stories somehow can be different version all over countries.

No matter where you travel, you will certainly encounter creepy folklore stories or creatures that are originated in that place.

You will definitely meet some people who are willing to share some of the creepiest otherwise interesting folklore experiences.

Sometimes, these creepy folklore stories shared by the people can merely haunt your dreams or drain your body of its soul.

Here are some of the creepiest folklore stories around the world. The slit-mouthed woman is a very creepy and disturbing ghost story stated as a Japanese folklore that gets into the nerves very quickly.

There is a belief in Japan, if you are approached by a woman in a medical mask in a city street, she will begin to ask you questions.

People often say that the ghost ask questions such as if she’s pretty or not and believe, no matter what you answer, you will die.

Her mouth is open in an extreme slit, as if someone craved her mouth open. After revealing her marks, the woman gives you the same treatment before ending your suffering. A small gnome-like being living in barns or farms house nearby woods. People believe, they are excellent at hiding and sometimes turn invisible.

You only ever see them in glimts. If you treat them with respect, they pay it back.

Yet, if you somehow insult them, they can be very creepy and vicious. Skondhokatas, is a folklore from the Bengali culture which is new compared to other spirits and demons in folklore.

They are the decapitated and deceased spirits of those people who die riding the trains.

When approached by these spirits, they ask and beg you for help in finding their lost head.

It is said that if people do not accept this task, the Skondhokatas may possess by one.

The Not-So-Friendly Face of Skogsra According to the folklore from Sweden, this mythical creature is said to appear as a beautiful and kind woman near the edge of a forest.

She then traps her victims deep into the trees, where the victims get lost and never come back again.

People often believe about the tale of a local creepy person near upstate New York known as The H Man living in the woods.

They say the H man kills campers, and carves an H into the chest of the victims.

The Ghost Train of Stockholm, Silverpilen More of an urban legend, the Silverpilen is a ghostly and otherwise supernatural train from Sweden. The rumors started in 1980’s in Stockholm of an unusual train.

The Silverpilen is sliver or otherwise grey, completely different than the other normal subway station.

It is said that anyone who rides the train is the only passengers on the train. Some people say that the victims are convinced to step into the cars once the train is seen pulling up at the station.

The fate of whoever rides the train is never discerned. People have theorized that the ghost train drives off into the distance and simply kills the unlucky passenger creepily. One of the creepiest folklore stories in Trinidad, The Dounes are seen in the forest and jungles, often very young and poor.

The Dounes are said to be the ghosts of children who died before being redeemed of their sins. They appear as small children with backwards feet and no faces.

Multiple rural reports are filed each year in Trinidad where children are taken by the ghosts. It is believed that these ghosts take the children to join them in their miserable afterlife. 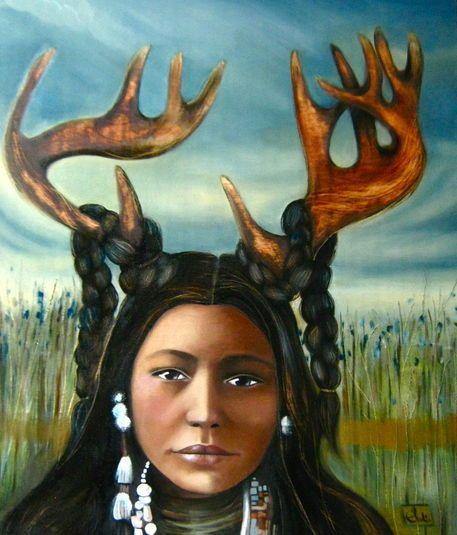 From the Native American Folklore, Deer Woman is a story of a creepy ghost who is a shapeshifter and appears in various forms.

She is believed to be old woman, a young woman, and sometimes a deer as well. In some of the cases, she is also said to appear representing upper body as a woman and lower body as a deer.

Likewise, when she appears as a human, she has all the features of a human except her feet shaped like a deer’s hooves. She is said to call out for men behind the bush and waste them until their death. Sundel Bolong from Malaysia, is described a creepy folklore story of a woman with long hair and always seen wearing a white dress.

The lore says that she is a ghost or a soul of a woman who died while she was pregnant.

Her baby was born from her back, creating a hole hidden inside her hair. People believe her being a very sensitive spirit, if rejected by a man, spays him. The story of Black Aggie is of a man named General Felix Agnus, a Civil War veteran turned publisher, who died and was buried in the Druid Ridge Cemetery.

According to the legend, the statue of Black Aggie was little creepy at the daylight, yet ordinarily.

But at the night, the statue used to have glowed eyes red at midnight, haunted by the ghost of Agnus’s wife. Anyone who met her graze was struck blind or be in a miserable situation.

The Relationship Between Language and Culture
Lost Civilizations of the World