The entire world has been making fun of Americans and how they use the microwave for boiling water. This whole ordeal began when Non-Americans noticed that Americans boil their water in their microwave. They do this to make coffee or just to make tea.

And the whole world was…to say it in one word DISGUSTED. It was one of those things that took the Non-Americans by surprise. And Americans were the butt of the joke on Twitter and Reddit for microwaving their water.

And well, there was some name-calling as well.

Moreover, the rest of the world discovered and were surprised that Americans do not use kettles to boil their water.

Apparently, most Americans do not own kettles, but instead microwave their water. This is wrong. Mind. Blown.

We are here to spill the tea. And we have to admit this it’s a controversial one especially if you are British. For the Americans reading, it is a sign of victory for you. Stand tall with your head held high.

While the entire world has been trashing Americans and how they use the microwave for boiling water, research proves that it helps improve the extraction of tea. I can’t even!

There is always something controversial brewing out from science experiments and this time they have brewed a new improvement on brewing tea. And it is to make your tea in the microwave. That’s right.

According to research conducted by Dr. Quan V.Vuong, the typical household conditions such as the use of a kettle for brewing tea in a teabag (200 mL freshly boiled water for 2–3 min) is not sufficient to extract all the catechins. Apparently, Catechins are the chemical components that are potentially good for you. The Catechins are released only 62% by typical conditions, however, 80% by microwave boiling the tea. But, I mean who cares about Catechins. 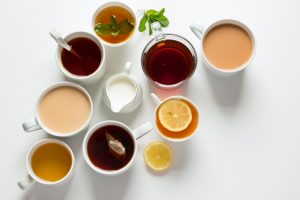 But what we do care about is Caffeine. Dr. Vuong also studied the Caffeine levels when microwave boiling the tea. The extraction of Caffeine by this “taboo tea” is 92% in comparison to 76% extraction by using typical household conditions. And that sounds pretty good to us. More Caffeine to wake us up.

So what can we do to extract the most out of teabags? You will discover that “perfect” cup of tea by following these instructions:

Put hot water in a cup and dunk in your teabag. So far so good!

Put the cup in a microwave oven and heat it at 500 watts for 60 seconds. Outrageous!

Wait a minute. Then dunk your teabag into the water 10 times in up and down motions. Enjoy your scientifically perfect cup of tea.

Maybe Americans knew it all along!

Also Read: Different Types of Tea and Their Health Benefits

A brief History of Chocolate
Learn To Live With Positive Mindset: A Guide