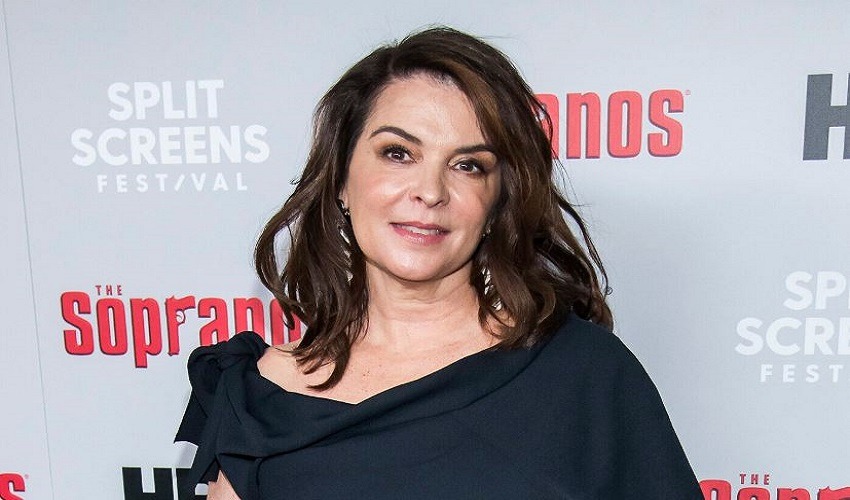 The Primetime Emmy Award-nominated, Annabella Sciorra is successfully active on her career as an American actress. She is widely famous for her portrayals in films like True Love (1989), Cadillac Man (1990), Jungle Fever (1991), The Hand That Rocks the Cradle (1992), The Addiction (1995), etc. Also, she gathered fame through her role as Gloria Trillo in the American crime drama TV series, The Sopranos.

The 59 years old, Sciorra was married to Joe Petruzzi who she divorced in 1993. She filed testimony against Harvey Weinstein as the first of six women for sexually abusing her. The allegations of her rape case have made a lot of headlines till then. Let’s find out what was actually happened in her life in her biography.

Annabella Sciorra was born as Annabella Gloria Philomena in Brooklyn, New York, the United States. Her parents migrated to the USA from Italy before her birth. Her father originally comes from the Central Italian region of Abruzzo.

Whereas, her mother is from Formia which is located in the Central Italian region of Lazio. Thus, Annabella holds an American nationality and belongs to Italian-American descent. Since a tender age, Anna was so much involved in dancing classes.

As a matter of fact, Anna went to the Herbert Berghof Studio in order to take drama classes. She then joined the American Academy of Dramatic Arts and studied theatre and acting. The United States was the best option for Anna to pursue her career in the entertainment field.

Annabella Sciorra first stepped into the entertainment industry through a miniseries, The Fortunate Pilgrim where she played the role of Octavia in 1988. After a year, in 1989, she made her film debut as Donna in the American comedy film, True Love. For her performance, she also got praised by the critics where Janet Maslin commented:

Ms. Sciorra, with her gentle beauty and her hard-as-nails negotiating style, perfectly captures the mood of the film and makes Donna fully and touchingly drawn.

In fact, Sciorra also received a nomination for the Independent Spirit Award for Best Female Lead. She attracted more fans after playing the co-lead role in Spike Lee’s movie, Jungle Fever alongside Wesley Snipes. She then appeared in some famous films like Jungle Fever (1991), The Hand That Rocks the Cradle (1992), The Addiction (1995), Cop Land (1997), and What Dreams May Come (1998).

Apart from films, Anna also performed her acting skills in several popular TV series. In 2005, she was one of the main cast of Law & Order: Criminal Intent where she played the character of Det. Carolyn Barek. She also worked in the TV series like The Good Wife, Blue Bloods, Bull, GLOW, The Sopranos, etc. Recently, in 2019, she made her appearance alongside Melissa McCarthy, Tiffany Haddish, Elisabeth Moss, Bill Camp in the American crime film, The Kitchen.

The American actress, Annabella Sciorra is currently in her late fifties. As we mentioned earlier, she currently at the age of 59. On the upcoming 29th March, she will enter her sixties. As we can see, The Kitchen star enjoys her birthday on 29th March every year. As per her natal day, Anna’s zodiac sign is Aries.

The 59 years old, Annabella Sciorra was previously married to Joe Petruzzi. Her former spouse, Joe is an actor who is famous for his works in The Beast (1996), The Widow (2018), and Water Rats (1996). The ex-couple had a private wedding ceremony on 31st December 1989.

There is no information about whether the couple became parents or not. After sharing nearly four years of married life together, the former couple parted their ways with a divorce on 20th July 1993. Since the divorce, Anna never married anyone.

Although Annabella Sciorra never got married for the second time, she was in a beautiful relationship with Bobby Cannavale for three years. Her then partner, Bobby is an American actor, famous for his recurring roles in Third Watch, Boardwalk Empire, Vinyl, Will & Grace, etc.

Well, Anna had begun dating Bobby in 2004, however, they split up in 2007. After their separation, Anna remained single. On the other hand, Bobby started dating the Australian actress, Rose Byrne in 2012. Since then, they are living in a blissful relationship.

According to Annabella, Weinstein raped her forcibly into her apartment in 1993. Not only this but she also disclosed that she is repeatedly sexually harassed by Weinstein since the event took place.

Adding more, Anna revealed that she met Harvey at a party in Los Angeles in 1990 and gave her a ride to her home. After the ride, when Anna got ready for her bed, Weinstein suddenly came back and looked if she was alone. Harvey then pushed Anna and started undressing his T-shirt. Anna explained the event saying:

I said, No, no, but there was not much I could do at that point. My body shut down. It was just so disgusting that my body started to shake in a way that was unusual. I didn’t really even know what was happening. It was like a seizure.

Well, the court is still testifying the allegations whether it was true or not. The result of the jury is yet to come in the media.

The 59 years old actress, Annabella has got a slim body shape. Even at this age, she still looks beautiful and attractive. She stands at a height of 5 feet and 1 inch i.e. 1.57m. As per various tabloids, her weight is currently 121 lbs i.e. 55 Kg.

Moreover, Anna’s hair color is dark brown and eyes are light brown. Mentioning her body measurements, her breast, waist, and hips size 34-23-33 inches respectively. Besides, her shoe size is 9 (US).

The American actress, Annabella Sciorra is working for the entertainment industry for a long time. Over the past years, she has appeared in many popular films as well as TV series. Her initial film, True Love was made with a total budget of $750 Thousand that grossed $1,354,268 on the box office collection.

In the same way, her 1992 film, The Hand That Rocks the Cradle was made with a total budget of $11.7 Million that surprisingly made $140 Million on the box office collection. At present, she holds a net worth of $6 Million as per the Celebrity Net Worth.

Therefore, Anna is living a lavish life with such huge capital with her family at the current moment.

Leila Janah: Everything About The Late CEO Of Samasource -Cause Of Death
Sharper Brain :10 Tips and Tricks for making your brain sharper