Often times humans tend to forget the fact that we’re not the only ones living on this planet.

We forget that other animals, birds, insects, plants, and microorganisms also make up what the earth is all about.

Yet, here we are, being one of the most intelligent creatures, destroying what isn’t even ours in the first place.

We’re also almost solely responsible for the extinction of thousands of animals, birds, and plants.

The world once filled with so many beautiful and colorful creatures, today has fallen off.

We’re really approaching a dark era where the world is left without animals or plants.

And the worst part is that it is all because of us humans and our destructive behavior.

Either for consumption or simply as a trophy, human beings have absolutely no shame in killing off the poor animals.

And in just last few decades, more animals and birds have become extinct than ever.

Here are 7 animals that are extinct in the last decade due to humans.

One thing humans are very proud of is collecting body parts of animals which is more important to animals than to us.

Pride is one reason and the other is the myth that these parts have healing abilities.

Which is exactly why the West African Black Rhinos are extinct.

Initially, the population of black rhinos across Africa was millions. They grazed and survived as it was their own land.

However, thanks to poaching, the number decreased immensely. The poachers slaughtered the friendly giants for their horns which is believed to be medicinal.

Thus, the West African Black Rhinoceros is on the list of extinct animals. Tortoises have a lifespan of for than a hundred years. Yet human behavior has made it possible for them to go extinct.

In 2012, the only remaining Pinta tortoise, Lonesome George passed away.

He was over 100 years and was discovered in 1972. George was a Galapagos Pinta tortoise from the remote Pacific Islands.

But as explorers started invading the lands, the number significantly decreased.

And after George’s death, the whole species has gone extinct.

Seals are one of the friendliest animals. They’re intelligent and can be very good friends with humans.

But we have successfully managed to bring an end to the only seal species to the Caribbean and Gulf of Mexico, Monk Seals.

They were officially declared extinct in 2008 as they became victims of poachers for meat and oil. When the animated film Rio came out in 2011 everyone fell in love with Blu and Jewel, the male and female Spix’s Macaw, a species of parrot that is beautifully blue.

But sadly these beautiful and vibrant bird species was declared extinct in 2018.

The biggest reason behind their extinction is the lack of a habitable environment. Dolphins are the most intelligent beings on earth. But due to us humans they’re also on the verge of disappearing for seas and oceans.

In fact, Baiju Dolphins on the Yangtze River dolphins have already gone extinct.

The last sighting of this river dolphin was in 2002 despite scientists claiming to have seen one without any evidence.

These mammals are disappearing due to overfishing, pollution and poaching, boat traffic, and boat trafficking. Derwent river sea star was in an abundance before in their own habitat near the Derwent River, Tasmania.

But as the population grew along with it grew pollution. This then added to the poor quality of water.

This led to the disappearance of the Derwent river sea star.

Another factor that led to its extinction was the increase in invasive species.

So, in 2010 the sea creature was officially declared extinct as the researchers couldn’t find a single species living. 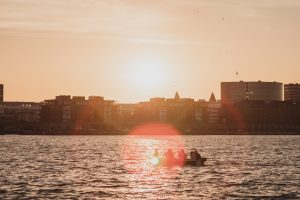